Skip to content
Exercise every day: no excuses! Here is why.
Exercise may be the best protection against ageing: it keeps the body decades younger.
The most highly fit have the lowest risk of dying. We were born to run.
Low cardiorespiratory fitness may be more dangerous than smoking!

Dr. Peter Attia in conversation with Dr. Andrew Huberman: Just for reference: Smoking is a 40% increase in all-cause mortality (ACM). That means, at any point in time, a smoker is 40% more likely to die than a non-smoker. High blood pressure is a 20-25% increase in ACM. Type 2 diabetes is a 25% increase in ACM. Low muscle mass people have a 200% increase in ACM compared to people with high muscle mass. People who are in the bottom 25% for their age and sex in terms of VO2 max and you compare them to people that are people at the 50th to 75th percentile, that is a 200% risk of ACM. The benefits of exercise are such that arguments over supplements or diets are silly until exercise is in order.

Stillness is bad. Roughly 3.2 million people die each year because of physical inactivity. Regular exercise, especially among older adults, is critical to good health. The results of 13 studies describing eight different cohorts suggest that regular physical activity is associated with an increase of life expectancy by 0.4 to 6.9 years.

Dr. Andrew Huberman, in this video, states that muscle strength starts declining in one’s 30s. The rate of decline accelerates at age 60. So, exercise is more important as one gets older. Resistance training causes muscle to be less insulin resistant.

Muscular strength is inversely and independently associated with death from all causes and cancer in men, even after adjusting for cardiorespiratory fitness and other potential confounders.

Regular physical activity is one of the most important things you can do for your health. Being physically active can improve your brain health, help manage weight, reduce the risk of disease, strengthen bones and muscles, and improve your ability to do everyday activities. Regular exercise (resistance and aerobics) has a huge effect on muscle functioning and, ultimately, healthspan. 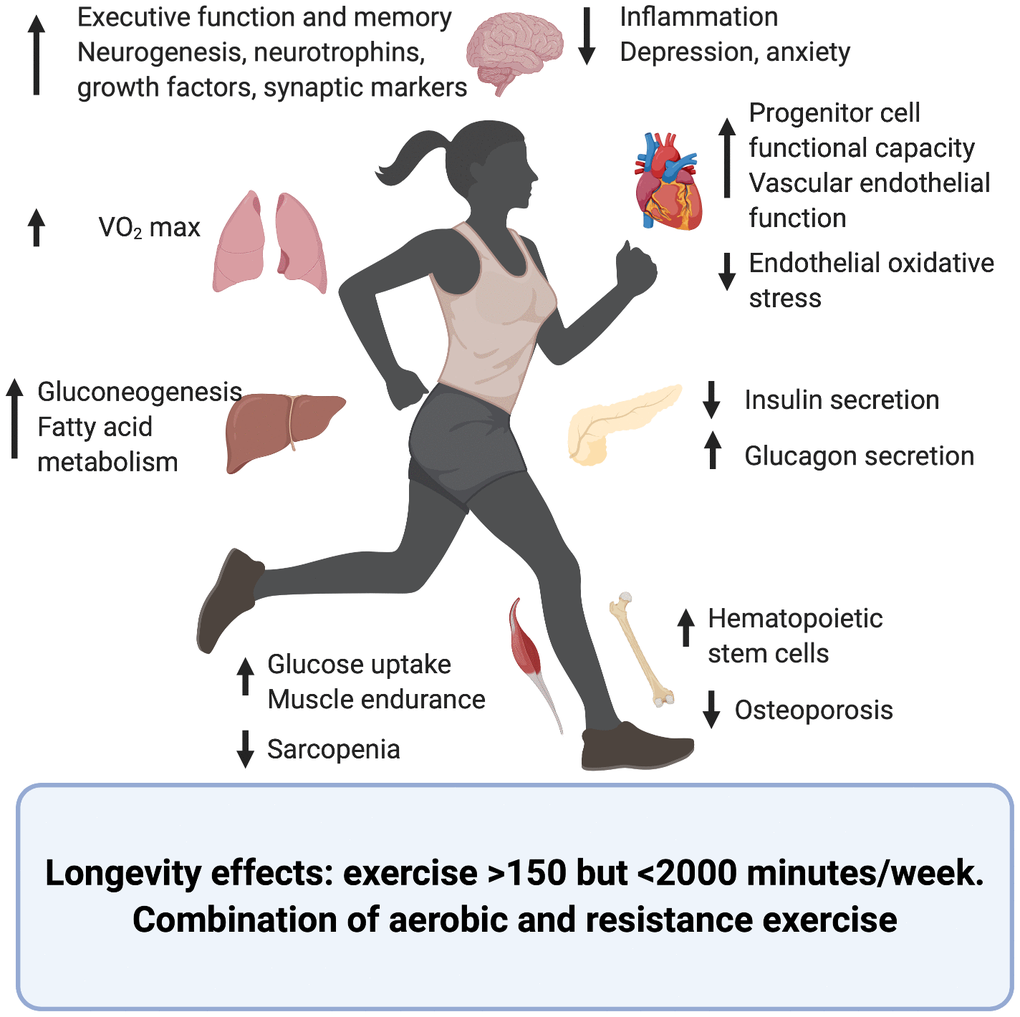 Dr. Peter Attia: Four types of exercise should be done: stability, strength, aerobic efficiency, and anaerobic peak. Exercise is a slam-dunk for every chronic malady, including cancer.

Drive less, walk and cycle instead.

Exericise for slower tendon ageing. Exercise slows age-related idiopathic pulmonary fibrosis . Exercise can save a ton of money in healthcare costs. In a very real sense, our muscles make our own precision medicine. It’s a targeted cascade of chemicals that help prevent disease, repair injury, and help us live longer, healthier lives.

Tommy Wood MD, PhD in conversation with Dr Rangan Chatterjee, discusses the contribution of muscle and exercise to health.

This study recruited 125 amateur cyclists aged 55 to 79, 84 of which were male and 41 were female.  The men had to be able to cycle 100 km in under 6.5 hours, while the women had to be able to cycle 60 km in 5.5 hours. Smokers, heavy drinkers and those with high blood pressure or other health conditions were excluded from the study. The study showed that loss of muscle mass and strength did not occur in those who exercised regularly. The cyclists also did not increase their body fat or cholesterol levels with age and the men’s testosterone levels also remained high, suggesting that they may have avoided most of the male menopause. More surprisingly, the study also revealed that the benefits of exercise extend beyond muscle as the cyclists also had an immune system that did not seem to have aged either. Too much HIIT could disrupt athletic performance and metabolism, and maybe destabilize your blood sugar. About 90 minutes a week is a safe amount of HIIT for healthy people.

Exercise can save a ton of money in healthcare costs. In a very real sense, our muscles make our own precision medicine. It’s a targeted cascade of chemicals that help prevent disease, repair injury, and help us live longer, healthier lives. Exercise beats drug treatment. Exercise beats vitamins for preventing falls. and helps preserve independence. Resistance exercise works via preventing falls and broken bones. Even once per week helps. Regular exercise can really improve your proprioception and coordination, meaning if you are a clumsy person, you can fix that.

From a video by Dr. Brad Stanfield: For building muscle mass and for maintaining muscle mass through a positive muscle protein balance, an overall daily protein intake in the range of 1.4–2.0 g protein/kg body weight/day (g/kg/d) is sufficient for most exercising individuals, a value that falls in line within the Acceptable Macronutrient Distribution Range published by the Institute of Medicine for protein.

Exercise throughout life will, via AMPK, preserve the functionality of mitochondria. Functioning mitochondria are essential to avoid chronic diseases.

This study of 5,446 women in the United States who were 63 and older found that higher levels of light physical activity and moderate-to-vigorous physical activity were associated with lower risk of death. Higher sedentary time was associated with higher risk of mortality. These associations were consistent among women who had different levels of genetic predisposition for longevity.

Exercise above the recommended amount can provide greater health benefit. People in hunter-gatherer societies generally don’t run every day, yet they enjoy a long healthspan. Being obese is no excuse: the obese benefit from exercise like anyone else.

The benefits of walking are pointed out by Dr. Michael Greger (with lots of references).

Never too late to exercise

These two doctors (Talking with Docs) pointed out this excellent study of 100,000 people in their 70’s that, besides confirming that aerobic exercise is wonderful, also confirmed that resistance training will seriously extend one’s lifespan and avoid chronic diseases.

Resistance training modulates reticulum endoplasmic (blood vessel) stress, independent of oxidative and inflammatory responses, in elderly people. Regular physical activity is suggested to be an effective intervention in improving age-related diseases such as osteoporosis, sarcopenia or muscle loss and dynapenia or loss of muscle strength, cardiovascular diseases, and type 2 diabetes.

Walking fast conferred the greatest benefit in this study of 474,919 people with an average of 64.8 years for men and 72.4 years for women.