You’ve heard time and again that it’s not wise to eat too much red meat, especially if processed, since higher intakes are linked with increased risks of obesity, cardiovascular disease, type 2 diabetes and several cancers. A growing number of studies suggest dietary patterns high in meat may promote cognitive decline, too.

“There is strong evidence that a typical Western diet, which is rich in meat, high-fat foods and sweets, increases the risk of developing dementia, including Alzheimer’s disease. 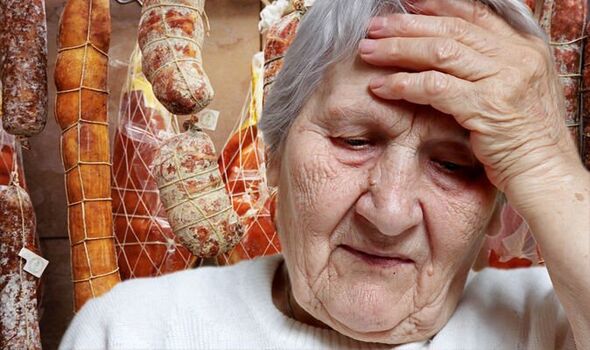 Cuisines in Blue Zones around the world can vary, but share common traits: they’re mostly plant-based, include plenty of carbs, and have little to no meat or processed food. A surgeon described his experiences operating on patients who ate a plant-based diet, noting that their arteries were healthy and pliable. In contrast, he observed that the arteries of meat-eaters were so clogged with plaque from cholesterol build-up, the doctor said they felt “crunchy.” The surgeon himself lived to be 104.

When Japan made the nutrition transition from the traditional Japanese diet to the Western diet, AD rates rose from 1% in 1985 to 7% in 2008. The most important dietary link to AD appears to be meat consumption, with eggs and high-fat dairy also contributing. The mechanisms linking dietary risk factors to AD are fairly well known and include increased oxidative stress from metal ions such as copper as well as from advanced glycation end products associated with high-temperature cooking, increased homocysteine concentrations, and cholesterol and its effects on amyloid beta, insulin resistance, and obesity. 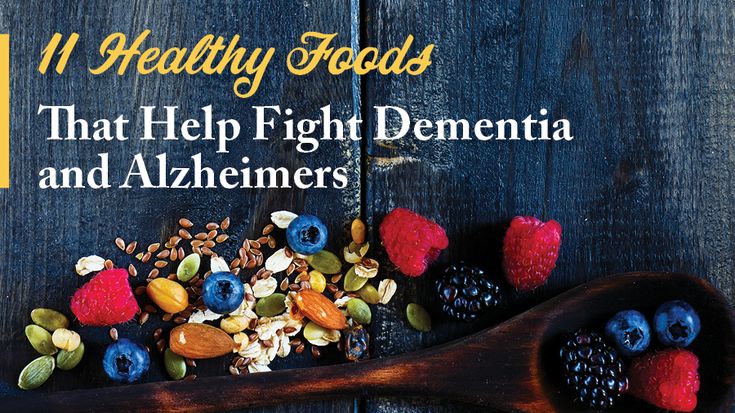 Eliminating all animal products is ideal, but not necessary. However, research has shown that animal proteins and saturated fat immediately cause vasoconstriction; increase and persistence of low-grade chronic inflammation; negative effects on fecal microbiota, which recent research has shown is vital in modulating many biochemical and metabolic pathways, particularly in prevention and control of many metabolic diseases and some cancers; and lipid dysmetabolism.

White meat is not better than red meat in terms of cardiovascular risk.

Meat heavy diet → early mortality due to multiple pathways, including IGF-1 and mTOR. The primary hormone that governs how fast we age is IGF-1.

Our bodies do not thrive on an all-meat diet. A diet containing too much red meat and not enough fruit and vegetables could increase your body’s ‘biological age’ and contribute to health problems.

This study of 2,621 people who were an average age of 25 showed that maintaining good dietary practices throughout adulthood can help to preserve brain health at midlife. Good dietary practices were defined as being close to three heart-healthy diets: The Mediterranean diet, the DASH diet, and the APDQS diet. All are low-meat diets.

From the Adventist Health Study: matched subjects who ate meat (including poultry and fish) were more than twice as likely to become demented as their vegetarian counterparts  and the discrepancy was further widened  when past meat consumption was taken into account.

Glycation affects physiological aging and neurodegenerative diseases such as Alzheimer’s disease and amyotrophic lateral sclerosis. Modulation of the AGE-RAGE axis is now considered promising in the prevention of neurodegenerative diseases. Dietary advanced gycation end products are associated with a decline in memory including Alzheimer’s. AGEs explain many of the neuropathological and biochemical features of AD such as extensive protein crosslinking, glial induction of oxidative stress and neuronal cell death. Oxidative stress and AGEs initiate a positive feedback loop, where normal age-related changes develop into a pathophysiological cascade. AGEs may contribute to eventual neuronal dysfunction and death as an important factor in the progression of various neurodegenerative diseases, including Alzheimer’s disease. 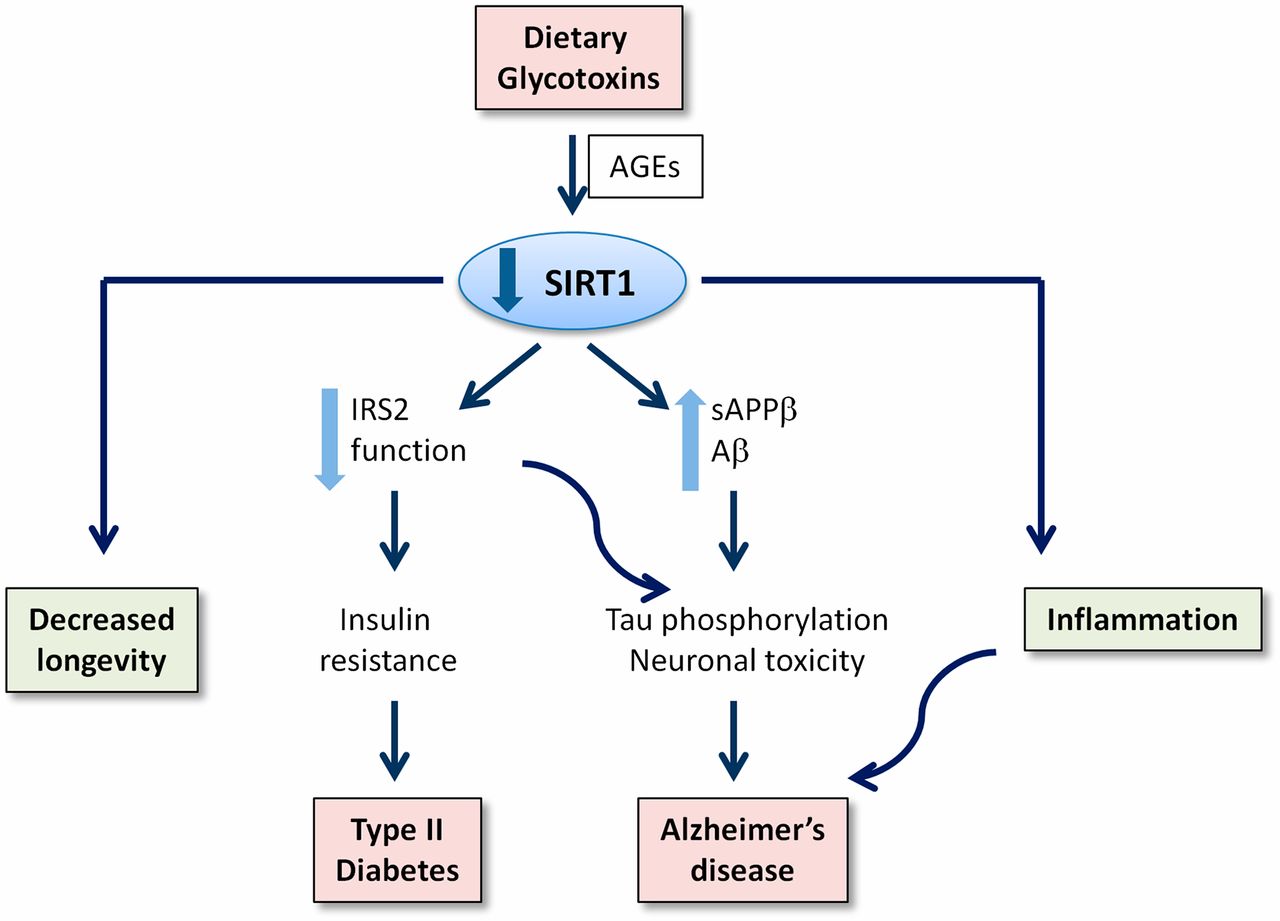 When meat is heated, it can produce advanced glycation end products (AGEs), sometimes called glycotoxins, which form when protein or fat reacts with sugar.  The research found a link between high blood levels of these and cognitive decline in adults over 60, as well as reduced insulin sensitivity (a precursor to type 2 diabetes), the BBC reported. Mice fed a diet high in AGEs also accumulated a defective protein in their brains and performed worse on mental and physical tests.

AGEs are naturally present in uncooked animal-derived foods, and cooking results in the formation of new AGEs within these foods. In particular, grilling, broiling, roasting, searing, and frying propagate and accelerate new AGE formation.

Most processed meats, such as sausages and bacon, are cooked at high temperatures until brown. This browning is an indicator that toxic compounds, called advanced glycation end-products (AGEs), have formed on the surface of the meat. AGEs cause neuro-inflammation in the brain.

The idea is that a diet rich in AGEs can change the brain’s chemistry, at least in mice, according to the BBC: It leads to a build-up of defective beta amyloid protein–a hallmark of Alzheimer’s disease. The mice eating a low-AGEs diet were able to prevent the production of damaged amyloid. The mice performed less well in physical and thinking tasks after their AGEs-rich diet.

Food-derived AGEs, an environmental factor, contribute to both AD and MS by causing chronic SIRT1 suppression. Importantly, reduction of food-derived AGEs is feasible and may provide an effective treatment strategy for both these epidemics.

In contrast,  plant-based foods, such as vegetables, fruits, legumes and whole grains, contain relatively few AGEs, even after cooking. These are the same types of foods that are linked with lower risk of Alzheimer’s disease and that are more environmentally friendly than meat, making them good choices.

Red meat made headlines recently as a food that may raise Alzheimer’s disease risk. These news stories were based on a study published in the Journal of the American College of Nutrition. The analysis included 10 countries: the United States, Brazil, Chile, Cuba, Egypt, India, Mongolia, Nigeria, Republic of Korea and Sri Lanka.

Eating too much red meat, which raises brain levels of iron, may heighten the risk of developing Alzheimer’s disease. The MRI scans showed that iron builds up over time in the hippocampus but not the thalamus. They also saw an association between iron accumulation levels in the hippocampus and tissue damage in that area. 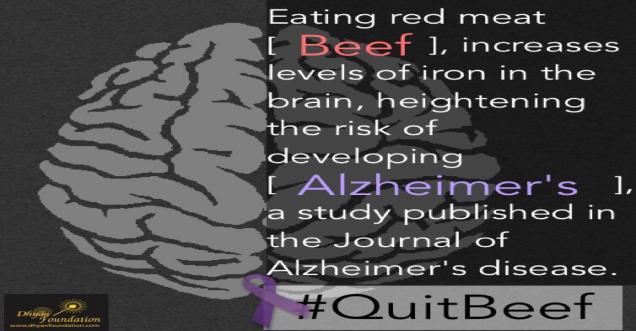 The effect of red meat consumption on mortality was shown by a study of 53 553 women and 27 916 men without cardiovascular disease or cancer.

Even a little bit of red or processed meat increases death risk.

Intake of red meat is not essential and appears to be linearly related to total mortality.

This review of large-scale studies involving more than 1.5 million people found all-cause mortality is higher for those who eat meat, particularly red or processed meat, on a daily basis.

This meta-analysis of 17 studies indicates that higher consumption of total red meat and processed meat is associated with an increased risk of total, cardiovascular and cancer mortality.

This study of 204 healthy adults (aged 20–55) showed that red meat and animal fat consumption were negatively correlated with cognitive performance, and this relation was dependent on the age of our participants.

In this cross-sectional analysis of the adult UK population (n = 496, 695), higher intake of red meat was associated with poorer cognitive function including reaction and reasoning ability, short-term and prospective memory especially among men.

This study 16,948 participants in the Singapore Chinese Health Study found that a higher intake of red meat in midlife was associated with increased likelihood of cognitive impairment in later life.

Research shows that saturated and trans fats found in dairy products, meats, pastries, and fried foods can increase the risk for cognitive decline. Instead, eat a plant-based diet, which helps protect brain health.

Diets high in saturated fat, such as from meat, may promote insulin resistance, which is a risk factor for Alzheimer’s disease.

Among 6,183 older participants in the Women’s Health Study it was demonstrated that higher saturated fat intake was associated with worse global cognitive and verbal memory trajectories, while higher mono-unsaturated intake was related to better trajectories.

Nampt is an NAD+-regenerating enzyme. Dysregulation of circadian rhythms reduce the expression of NAMPT.

Increased consumption of fat is a main contributing factor to obesity, leading to elevated levels of saturated fatty acids (SFA) both in serum and the hypothalamus. Elevated SFA in the hypothalamus results in deleterious effects marked by the induction of neuroinflammation, oxidative stress, endoplasmic reticulum (ER) stress, and circadian disruption, all of which can lead to hormonal resistance and neuropeptide dysregulation.

Critically, NAMPT mRNA and protein expression is decreased in the adipose tissue of high fat diet (HFD)-fed mice. Moreover, NAMPT expression is modulated by palmitate (a saturated fat) in the heart and the liver.

This meta-analysis of nine articles with seventeen prospective cohorts concluded that higher consumption of total red meat and processed meat is associated with an increased risk of total, cardiovascular and cancer mortality.

Substituting 10% of daily caloric intake from beef and processed meats for a mix of fruits, vegetables, nuts, legumes and select seafood could reduce your dietary carbon footprint by one-third and allow people to gain 48 minutes of healthy life per day.

Even working is a deli is hazardous: microwaving, grilling, and even storing processed meat makes it even more hazardous.

Part of the problem is that processed meats are often accompanied by other unhealthy foods. Data from 500,000 people showed that consuming a 25g serving of processed meat a day, the equivalent to one rasher of bacon, is associated with a 44% increased risk of developing dementia.

In this cohort study of 493,888 participants, each additional 25 grams (approximately a single serving) of processed meat per day was associated with a 44% increased risk for all dementias and a 52% increased risk for Alzheimer’s disease. Processed meat contains preservatives that are not present in fresh meat, such as nitrite which can turn into harmful compounds, increasing oxidative stress and inflammation. Also, processed meat is often high in sodium levels, which could lead to high blood pressure, a risk factor for dementia. 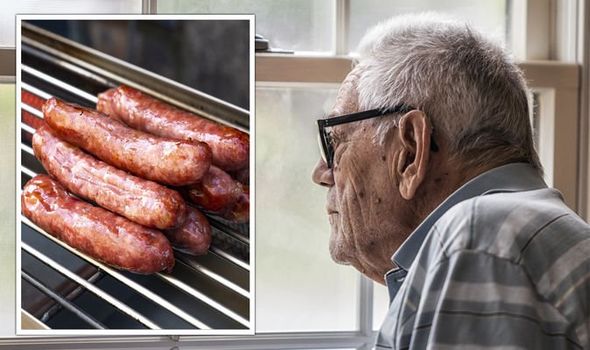 This study of 1,500 volunteers found that diets high in processed meats and snack foods may be associated with the risk of dementia.

A study of 2982 participants in the Seniors-ENRICA cohort, who were aged ≥60 years showed that a higher consumption of processed meat was associated with a higher risk of impairment in agility and lower-extremity function. Replacing processed meat by other protein sources may slow the decline in physical functioning in older adults.