Obesity is long-lasting and has persistent and negative health effects, attributable morbidity and mortality, and social and economic consequences that can impact a child’s quality of life. Because obesity is a chronic disease with escalating effects over time, a life course approach to identification and treatment should begin as early as possible and continue longitudinally through childhood, adolescence, and young adulthood, with transition into adult care.

This blog post on Avoiding Obesity may also be useful.

Causes of obesity in children and adolescents

If your child has been diagnosed with obesity or is overweight, adopting some or all of these measures can help your child reach and maintain a healthy weight. If your child is not currently overweight, the same steps can help prevent obesity over a lifetime. Another benefit: Embracing healthy lifestyle measures as a family will improve not just your child’s health but that of everyone in the household.

Obesity may be contagious among teens.

Infant antibiotic exposures are consistently associated with increased body mass. Early antibiotic use can cause obesity via an altered microbiome.

ADD stimulant drugs can cause “rebound” weight gain later on.

Minimize exposure to bisphenol A:

Shown by a study of 1,326 students in grades 4–12 from three schools in Shanghai.

Shown by the National Health and Nutrition Examination Survey (2003–2008).

Bisphenol S and bisphenol F may be even worse. Those who had greater levels of BPS and BPF in their urine were more likely to be obese compared to children with lower levels.

As is the case with adults, eating a substantial, quality breakfast can help prevent obesity.

There is an urgent need to spread awareness among children and young adults about these adverse effects of junk food.

High consumption of added sugars increased the probability for overweight/obesity among youth, irrespectively of other dietary or macronutrient intakes.

Consumption of drinks containing added sugars, fructose in particular, continues to increase and can play an important role in the onset of obesity and cardiovascular disease (CVD).

This video from Johns Hopkins All Children’s Hospital explains the problem with hidden sugars in food.

In addition to the effects on health, too much sugar early in life had an effect on how well the children did in school and how much money they made as adults. Adults born after rationing ended were 18.5% less likely to go to college and 16.6% less likely to have a job that required a high level of skill than adults born into sugar rationing.

The Mayo Clinic: Regularly eating high-calorie foods, such as fast foods, baked goods and vending machine snacks, can cause your child to gain weight. Candy and desserts also can cause weight gain, and more and more evidence points to sugary drinks, including fruit juices and sports drinks, as culprits in obesity in some people. 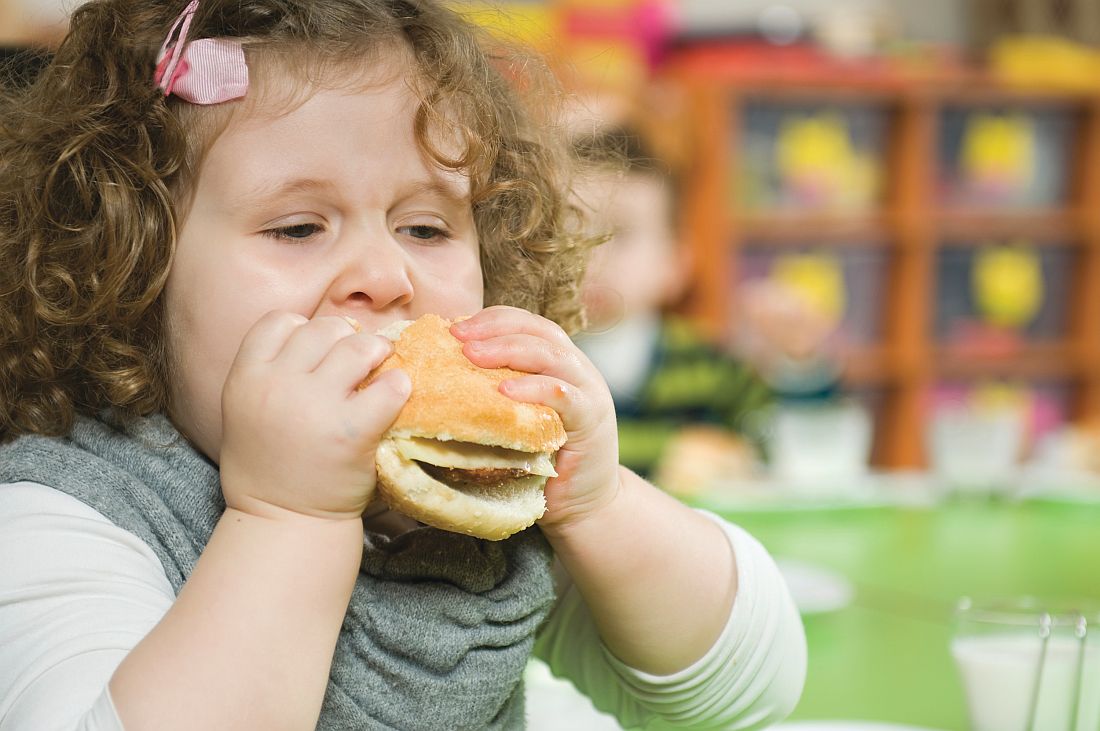 Puberty is when kids need to stop pigging out.

Limit soda consumption – or any other sugary drink, including sports drinks.

Sugary drinks are the worst offenders in the fight against child/youth obesity. It’s now clear that many children and adults are at risk for gaining weight if they consume too much of sugary drinks.

Deakin health researchers examined the data from a study of more than 4000 children aged 4—10 years and found a direct link between each time a child ate unhealthy foods and consumed sugary drinks and an increase in their weight.

This study of 168 2 to 5 yr old children showed that consumption of >12 fl oz/day of fruit juice by young children was associated with short stature and with obesity.

Sugar, due to it fructose fraction, is obesogenic. It hides in many children’s foods. 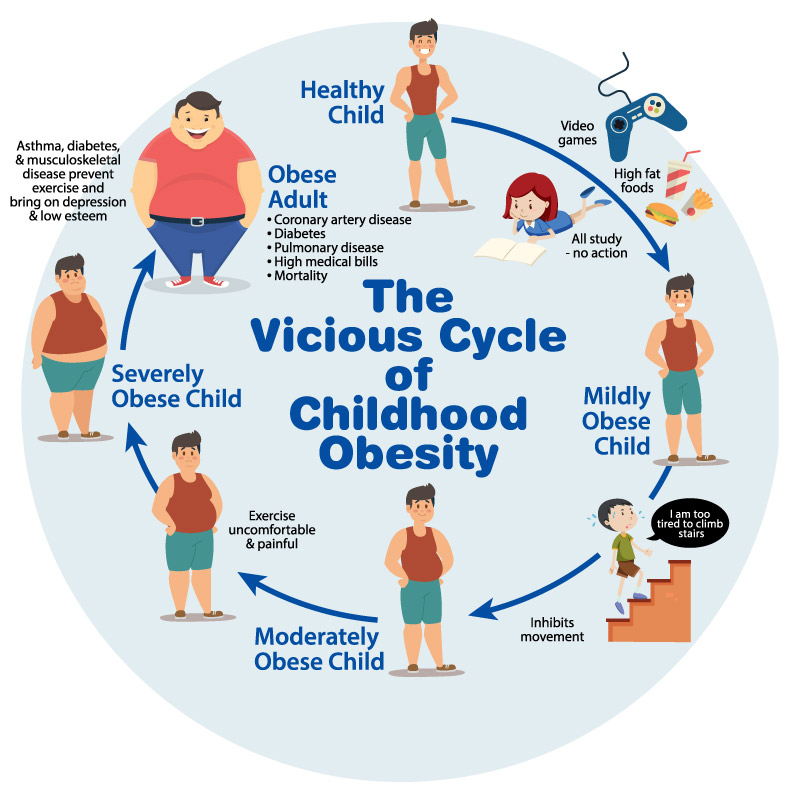 The Mayo Clinic: Children who don’t exercise much are more likely to gain weight because they don’t burn as many calories. Too much time spent in sedentary activities, such as watching television or playing video games, also contributes to the problem. TV shows also often feature ads for unhealthy foods. Some video games can promote unhealthy diets full of sugar, salt, and fat.

The CDC: The Physical Activity Guidelines for Americansexternal icon recommends that children aged 3 through 5 years should be physically active throughout the day. Children aged 6 – 17 years need at least 60 minutes of moderate to vigorous physical activity every day.

Exercise may not be effective when a high fat (fast food) diet is consumed.

The importance of adequate sleep The risk of being obese by age 21 was 20 percent higher among 16-year-olds who got less than six hours of sleep a night, compared with their peers who slumbered more than eight hours. This was found by analyzing health information from more than 10,000 American teens and young adults.  This was also shown in a study that observed over 1,000 Philadelphia-area high school students from their freshmen through senior high school years.

Sleep-related breathing problems and chronic lack of sleep may each double the risk of a child becoming obese by age 15. This was shown by following nearly 2,000 children for 15 years.

42 population studies of infants, children and adolescents aged 0 to 18 years which included a total of 75,499 participants also showed the link between sleep and obesity.

Regular bedtimes and adequate sleep during childhood may contribute toward a healthy weight in the teen years, a new study of 2,200 kids in 20 U.S. cities finds.

Sleeping less than 8 hours a night may be linked to weight gain in teens. Furthermore, obesity was linked to short sleep duration in teen males, with the fewest hours slept linked to the highest BMI levels.

Data obtained from 1994-2009 of 3342 adolescents in The National Longitudinal Study of Adolescent Health was used to analyze and assess their bedtimes and BMI. The results of the analyses are:

Endothelial (blood vessel) dysfunction is the first, although reversible, sign of atherosclerosis and is present in obese adolescents. Start an exercise routine in childhood for better health, less obesity as an adult.

This systematic review and meta analysis of 22 studies and 8 articles found that obesity in children is correlated with high blood pressure and high arterial stiffness.

Children who regularly walk or cycle to school are less likely to be overweight or obese than those who travel by car or public transport.

Those with genetic risk for obesity respond more strongly to advertising for obesogenic junk foods.

Passive smoke and air pollution drive childhood obesity. Exposure to second-hand smoke is associated with a larger waist and poorer cognition in children.

Physicians using body mass index (BMI) to diagnose children as obese may be missing 25 percent of kids who have excess body fat despite a normal BMI, which can be a serious concern for long-term health.

Self or parental opinions may not recognize teenage obesity – it is best to consult medical charts.

Seeing your kid as obese requires removing the rose-colored glasses. Even health professionals struggle with this.

The Consequences of Child and Adolescent Obesity

Childhood obesity can lead to→ adult obesity, and lots of adult health problems such as:

Childhood it the best time to intervene to prevent future health problems. The sooner that children start eating right, the better, according to Dr. Pooja Tandon, a pediatrician at Seattle Children’s Hospital. “Healthy behaviors start from a very young age”.

From EndocrineWeb: In addition to excessive body weight, typical signs and symptoms of childhood obesity include:

Childhood obesity can lead to immediate health problems as well as put your child at greater risk of developing medical issues in the future. These are some of the weight-related complications that children with obesity are at increased risk of:

Additionally, children who are obese have an increased risk of being overweight or obese as adults.

Obesity can have a significant negative effect on a child’s mental health, contributing to problems including:

Obesity can cause early puberty in boys.

Resolving child obesity can prevent a (disastrous) prediabetic diagnosis and even premature death. This study of 229 of pubertal obese children from Mexico City showed that magnesium-deficient diets are determinants of inflammation, while high intake of refined carbohydrates is a risk factor for insulin resistance, independently of central adiposity.

Kids who become overweight during their teenage years may be more likely to develop a stroke decades later.

Parents of children as young 12 who are overweight or obese should be offered options including weight-loss drugs, and surgery should be considered for teens, according to new guidelines from the American Academy of Pediatrics.

A plant-based diet is weight-loss friendly

Children who eat a Mediterranean-style diet are less likely to be overweight or obese than other youngsters. A Mediterranean diet, supplying plant protein, is a healthful choice for the whole family. The fiber featured in this way of eating will also benefit the gut microbiota.

A low-carb diet appears to be an effective method for short-term weight loss in overweight adolescents.

Epidemiologic studies indicate that vegetarian diets are associated with a lower body mass index (BMI) and a lower prevalence of obesity in adults and children. Plant foods are highlighted in the Dietary Guidelines for Americans, and children do not meet the current recommendations for most plant foods.

Children who are genetically predisposed to overweight by common gene variants can still lose weight by changing their diet and exercise habits.