The dangers of high blood sugar:

A good blood sugar level matters as much to healthy people as it does to diabetics. Even for people who don’t have diabetes or high blood sugar, those with higher blood sugar levels are more likely to have memory problems and dementia.

Blood sugar above 105 to 110 may be a cognitive hazard.
High-normal glucose shrinks the brain: keep blood sugar low!
Shown by a study of 266 men and women between the ages of 60 and 64: Even in the sub-clinical range and in the absence of diabetes, monitoring and management of plasma glucose levels could have an impact on cerebral health.”
Shown by 249 cognitively healthy non-diabetic individuals aged was 60-64: people whose blood sugar is on the high end of the normal range may be at greater risk of brain shrinkage that occurs with aging and diseases such as dementia.
Shown by a study 249 people in their early 60s whose blood sugar was “high-normal”: significant brain shrinkage among those whose blood sugar levels were high but still below the World Health Organization’s threshold for pre-diabetes.
Shown by a study of 104 healthy adults (ages 18 to 78) without diagnoses of diabetes or hypertension:  high-normal blood glucose levels were associated with decreased delayed associative memory, reduced accuracy of working memory processing among women, and slower working memory processing among men.

Blood glucose levels even at the normal range can have a significant impact on brain atrophy in ageing.

Shown by a study of 240 healthy adults: Senior moments, also dubbed by New York Times Op-Ed columnist David Brooks as being “hippocampally challenged,” are a normal part of aging. Such lapses in memory, according to this new research, could be blamed, at least in part, on rising blood glucose levels as we age. The findings suggest that exercising to improve blood sugar levels could be a way for some people to stave off the normal cognitive decline that comes with age.

Shown by a study of 2067 participants without dementia: higher glucose levels may be a risk factor for dementia, even among persons without diabetes.

Shown by a study of 124 cognitively normal, non-diabetic adults with a family history of Alzheimer’s disease: high blood sugar is an Alzheimer’s risk.

Shown by a study of 1,173 people, aged 75: moderately high blood sugar is an Alzheimer’s risk.

Shown by a study of 2067 participants without dementia: higher glucose levels may be a risk factor for dementia, even among persons without diabetes.

This systematic review and meta-analysis of 144 prospective studies concluded that prediabetes is a risk factor for all-cause dementia, alzheimer’s disease, and vascular disease.

Higher blood sugar is even more of a cognitive threat

Shown by a study of 5,189 people over 10 years: high HbA1c level is a cognitive threat. Even among individuals with HbA1c <6.5% (threshold for diabetes), higher HbA1c was associated with memory decline.

The A1C chart below can help a person convert and understand their A1C test results. The doctor can provide more context and describe ways to keep blood glucose levels in a safe range.

Hyperglycemia impairs neural activity in ways that are similar to what is observed in preclinical Alzheimer’s disease models.

Low blood sugar is also hazardous. SIRT3 may protect the brain during hypglycemia. SIRT3 is increased by exercise.

Blood sugar tends to rise with advancing age, even when one remains slim and continues to exercise.

Rice, bread  and potatoes raise blood sugar almost a rapidly as sugar does.

Due to differences in the gut bacteria, people’s glycemic respond to various foods can be wildly different. So, don’t assume that a good diet will control blood sugar. Check it/get it checked if there is any doubt. This is what high blood sugar feels like.

For those with stubbornly high blood sugar, Metformin might help. But Dr. Dale Bredesen suggests that lifestyle modification is vastly superior to medication for controlling blood sugar. Dr. Brednesen’s advice may not be applicable to those with a family history of diabetes.

Beetroot juice, despite the high natural sugar content, has not been found to raise blood sugar or insulin response. Beetroot juice powder is available.

Dietary restriction increases insulin sensitivity and lowers blood glucose in rhesus monkeys. For most, though, intermittent fasting may be preferable.

Medical News Today says “Time-restricted feeding seems to be beneficial for most people who are not experiencing acute illness or taking medications to lower blood sugar, for type 2 diabetes, for example.”

Early time-restricted feeding, a form of intermittent fasting (IF) that involves eating early in the day to be in alignment with circadian rhythms in metabolism improves some aspects of cardiometabolic health and that IF’s effects are not solely due to weight loss. 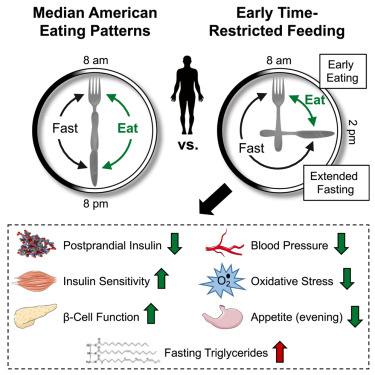 This systematic review and meta-analysis showed that intermittent fasting diets have certain therapeutic effects on blood glucose and lipids in patients with metabolic syndrome and significantly improve insulin resistance.

Consuming a bigger portion of daily caloric intake during the first half of wakeful hours may be preferred for better blood glucose regulation and weight control.

Time-restricted eating may lower blood sugar more than medication. This paper was discussed by Dr. Roger Seheult:
As shown in that paper: the control group’s HbA1c diminished 8% but the time-restricted eating group diminished 18% in 12 weeks. A diabetic medication might only reduce HbA1c by 7%. Instantaneous blood sugar also seriously decreased. The diabetic patients also lost significant weight via only intermittent fasting for 12 weeks.

A 2012 study found that incorporating legumes into the diet improved glycemic control and lowered the risk of coronary heart disease in people with type 2 diabetes.

Berberine: Research suggests that this compound lowers blood sugar by stimulating enzymes’ breakdown of glucose, promoting your tissue’s use of sugar and increasing insulin production. Berberine doesn’t work for everyone.

This meta-analysis of observational studies found that the consumption of cocoa/dark chocolate reduced the
serum fasting blood glucose (FBS) and LDL cholesterol concentrations of diabetic participants.

This systematic review and meta-analysis based on both long-term and short-term randomised controlled trials showed the beneficial long-term effects of cocoa products intake on cardiometabolic biomarkers for T2D, especially on blood glucose, lipid metabolism (LDL-C and TG), and inflammation (CRP).

In a study of 1,978 older adults publishing Sept. 21 in the journal Scientific Reports, researchers at Duke Health and the Duke Clinical Research Institute found people with irregular sleep patterns weighed more, had higher blood sugar, higher blood pressure, and a higher projected risk of having a heart attack or stroke within 10 years than those who slept and woke at the same times every day.

Amla (Indian gooseberry) can lower blood sugar. Here is a video about it. Dried whole amla fruits are available at Mountain Rose Herbs.

A mouse study showed that a small dose of BDNF was found to be effective in lowering blood glucose concentration. This indicates that BDNF regulates glucose metabolism by acting directly on the brain.

Australian scientists have shown that brown fat – a special type of fat that burns energy to produce heat – may also help to keep blood sugar steady in adults.

Mayo Clinic: For most young, healthy adults, caffeine doesn’t appear to noticeably affect blood sugar (glucose) levels, and having up to 400 milligrams a day appears to be safe.

This review of studies published in PubMed from 1998 to 2013 found that curcumin can reduce blood glucose level by reducing the hepatic glucose production, suppression of hyperglycemia-induced inflammatory state, stimulation of glucose uptake by up-regulation of GLUT4, GLUT2 and GLUT3 genes expressions, activation of AMP kinase, promoting the PPAR ligand-binding activity, stimulation of insulin secretion from pancreatic tissues, improvement in pancreatic cell function, and reduction of insulin resistance.

This systematic review and meta-analysis of 11 randomized controlled trials found that supplementation of isolated curcumin or combined curcuminoids were both effective in lowering the FBG concentrations of individuals with some degree of dysglycemia, but not in non-diabetic individuals. Isolated curcumin lead to significant decreases of the HbA1c compared to placebo.

Exercise to the rescue!

A systematic review and meta-analysis of available data published in Diabetologia (the journal of the European Association for the Study of Diabetes) suggests that combined aerobic and resistance training, rather than either alone, is best for controlling both blood sugar.

Afternoon exercise will lower blood sugar more than morning exercise. Caffeine in the morning will cause morning exercise to lower blood sugar similar to afternoon exercise. Moderate-to-vigorous physical activity in the afternoon led to an 18% reduction in insulin resistance, and the same types of activity in the evening were linked to a 25% reduction.

This systematic review and meta-analysis concluded that exercise plays an important role in optimizing glycemic control and improving quality of life (QoL), BMI, and waist circumference in type 2 DM patients. Exercise could be a safe adjunct therapy to medical treatments in these patients.

This meta-analysis of 17 randomized controlled trials found that green tea had favorable effects, for decreased fasting glucose and Hb A1c concentrations. is a long-term measure of blood sugar

This systematic review and meta-analysis of 27 randomized controlled trials involving 2194 subjects found that, in short-term trials, green tea supplementation significantly reduced fasting glucose, but had no significant effect on fasting insulin and HbA1c . (HbA1c. is a long-term measure of blood sugar).