Circadian rhythms are physical, mental, and behavioral changes that follow a 24-hour cycle. These natural processes respond primarily to light and dark and affect most living things, including animals, plants, and microbes.

The internal body clock sets the timing for many circadian rhythms, which regulate processes such as

“If your circadian clock is not quite right for years and years — you routinely suffer from disrupted sleep at night and napping during the day — the cumulative effect of chronic dysregulation could influence inflammatory pathways such that you accumulate more amyloid plaques”. 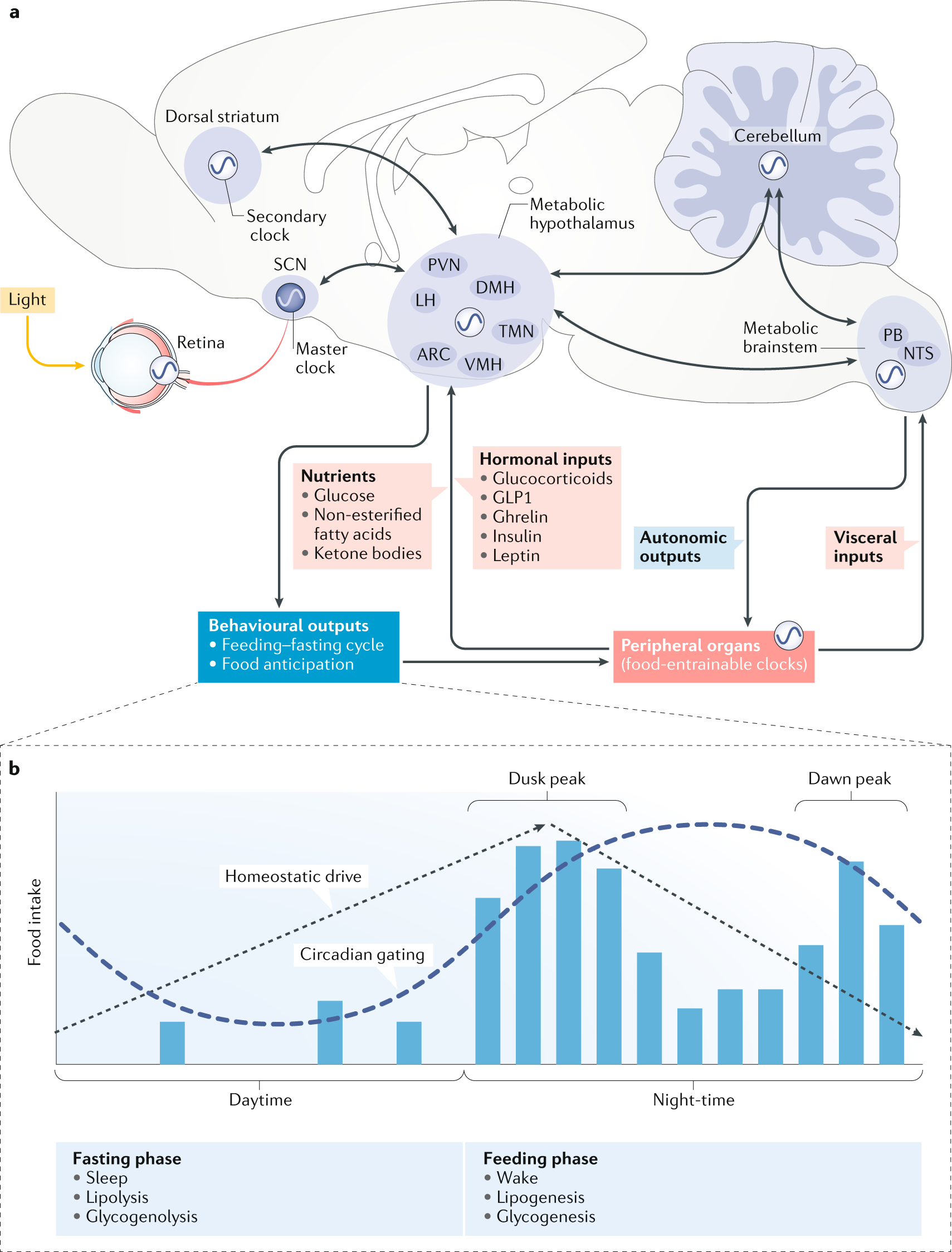 A strong, robust, circadian oscillation may help one avoid dementia

Synchronizing rhythms may delay the onset of neurodegenerative disease such as AD. A weak or misaligned circadian rhythm, can, over time, be causative of cognitive decline.

Circadian derangements/disturbed sleep feed the risk of developing AD. Dissociation between the output of the circadian clock and external environmental cues is a major cause of human cognitive dysfunction.

Proper circadian protein function is important in the maintenance of neuronal integrity. A robust circadian oscillation may minimize neuroinflammation.

Rats in which the circadian rhythm was messed up with continuous light for four months showed disrupted metabolic profiles, suggestive that their digestive systems may also have been adversely affected by the disrupted circadian rhythms. The level of soluble Aβ in the brain was also significantly higher in these rats compared to the controls, and they experienced down-regulation of anti-aging gene Sirt1 and up-regulation of the neuronal damage markers. Circadian rhythm disruption due to chronic light exposure caused memory and cognitive deficits in the rats. Collectively, these findings were suggestive of an AD-like phenotype.

There is a daily oscillation in Aβ42 clearance that was lost in cells without a circadian rhythm. We established the underlying cause of this oscillation was the circadian control of cell surface molecules, heparan sulfate proteoglycans, which have previously been shown to play a role in the regulation of Aβ42 clearance. We further showed that this regulation was specific to Aβ42, demonstrating a mechanistic link underlying the connection between the disruption of circadian rhythms and AD.

In addition to being a key regulator of the diurnal cycle, the circadian clock might also suppress oxidative stress and synaptic damage. For example, a reduced level of BMAL1, one of the circadian regulating factors, is thought to cause neurodegeneration, as evidenced by the astrogliosis, oxidative damage, and synaptic damage in Bmal1 knockout mice.

Circadian signalling is greatly disturbed in aging. There is a clear reduction in the amplitude of the circadian electrical rhythm, suggesting a weakening of the output timing signal. Other brain areas and organs not only show aging-related deficits in their own local clocks, but also receive a weaker systemic timing signal.  Consequently, chronotherapeutic interventions should aim at strengthening overall synchrony in the circadian system using life-style and/or pharmacological approaches.

Other brain disorders are linked to a dysfunctional circadian system.

Minimizing blue light in the evening will maximize endogenous melatonin.

“Shift work, especially rotating shift work, confuses our body clocks and that has important ramifications in terms of our health and well-being and connection to human disease,” said David Earnest, professor in the Department of Neuroscience and Experimental Therapeutics at the Texas A&M University College of Medicine. “When our internal body clocks are synchronized properly, they coordinate all our biological processes to occur at the right time of day or night. When our body clocks are misaligned, whether through shift work or other disruptions, that provides for changes in physiology, biochemical processes and various behaviors.” Eating meals during daylight hours may avoid some hazards of night shift work. The timing of calorie intake (eating-fasting patterns) is a modifiable lifestyle factor that has the potential to lessen the burden of circadian disruption and support health in shift workers. Time-restricted eating (TRE) is a behavioral intervention that limits the time of daily caloric intake to a consistent window of 6–12 h, without overtly attempting to limit energy intake. A 10-h time-restricted eating is feasible for shift workers on a 24-h schedule.

Circadian factors might play a crucial role in the etiology of depression. It has been demonstrated that the disruption of circadian rhythms by lighting conditions and lifestyle predisposes individuals to a wide range of mood disorders, including impulsivity, mania and depression.

There is considerable evidence that circadian and sleep disturbances are important in the pathophysiology of mood disorders. Depressed patients often show altered circadian rhythms, sleep disturbances, and diurnal mood variation. Chronotherapies, including bright light exposure, sleep deprivation, and social rhythm therapies, may be useful adjuncts in non-seasonal and seasonal depression. Antidepressant drugs have marked effects on circadian processes and sleep.

Multiple studies show an increased prevalence of depression in night-shift workers. One meta-analysis showed that night-shift workers are 40% more likely to develop depression than daytime workers. Conversely, circadian rhythm disturbances are common in people with depression, who often have changes in the pattern of their sleep, their hormone rhythms, and body temperature rhythms.

From this wonderful interview by Dr Rhonda Patrick with Dr. Satchin Panda, here is the following:

Every organ in our body has a clock that optimizes the function of that organ. These peripheral clocks keep their own time, but they are also affected by the timing of food intake.

A study of 49 day-shift office workers (27 in windowless workplaces and 22 in workplaces with windows) showed that, compared to workers in windowless offices, those with windows received 173 percent more natural white light exposure during work hours and slept an average of 46 minutes more per night. Workers who got more sunlight also tended to be more physically active according to this study. And an additional analysis of overall quality of life suggests that they’re generally happier, too.

Dr. Panda’s research in mice has demonstrated that time-restricted eating has health benefits that may include reductions in fat mass, improvements in glucose tolerance and insulin sensitivity, increases in lean muscle mass, lower inflammation, improved heart function with age, increased mitochondrial volume, especially in the liver and brown fat, and an increase in ketone body production. Protection from mild age-related hepatic steatosis (fatty liver). In the high-fat group this effect was especially robust: they experienced a 53% reduction in triglyceride accumulation.

Melatonin receptors are found in pancratic islet cells, where is signals and it inhibits insulin secretion. Insulin sensitiviy is very different between day and night. Calories taken early in the day may not have the same effect as calories taken late in the day. The melatonin receptor can inhibit insulin secretion. So: (dark) candlelight dinners may not be such a good idea.

A Spanish study found that delaying (3 pm) “lunch” cause participants to lose less weight than those who did not delay lunch. A study of fruit flies found similar benefits, even when introduced late in life. Additional information on obesity and the circadian clock is in this blog post on obesity.

Eleven overweight adults participated in a 4-day randomized crossover study where they ate between 8 am and 2 pm. The finding: Early time-restricted eating improves 24-hour glucose levels, alters lipid metabolism and circadian clock gene expression, and may also increase autophagy and have anti-aging effects in humans.

There is additional information on circadian health at the bottom of this blog post on avoiding diabetes.

This site may be helpful: http://www.mycircadianclock.org/.