One of the key drivers of aging is cellular senescence, a state of irreversible growth arrest induced by many pro-tumorigenic stresses. Senescent cells accumulate late in life and at sites of age-related pathologies, where they contribute to disease onset and progression through complex cell and non-cell autonomous effects.

Pharmacological treatments have been shown to extend lifespan through activation of autophagy, indicating autophagy could be a potential and promising target to modulate animal lifespan.

An essential process to maintain cellular homeostasis and functions, autophagy is responsible for the lysosome-mediated degradation of damaged proteins and organelles, and thus misregulation of autophagy can result in a variety of pathological conditions in human beings. 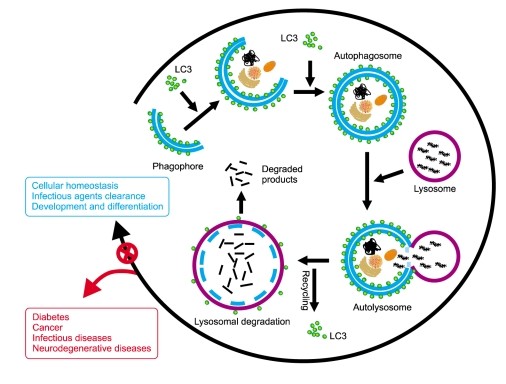 The failure of autophagy with age can be a very important aggravating factor in many diseases. Autophagy may provide an explanation why those suffering from Alzheimer’s or Parkinson’s also have other diseases. Autophagy failure leads to fat deposits and other garbage accumulation in the brain. Failure of autophagy in the brain affects other organs. Centenarians have better autophagy. Experiments in mice have shown the beneficial impact of maintaining CMA for healthspan and longevity. 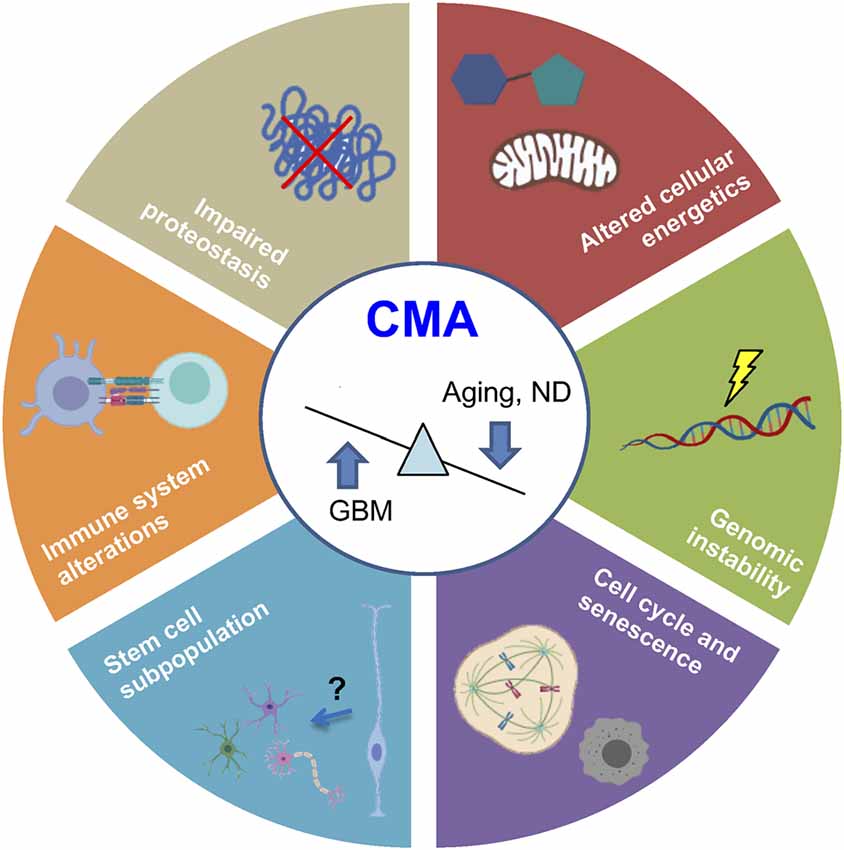 FIGURE 4. Common hallmarks of aging and cancer regulated by CMA. Recent evidence demonstrates that physiological aging and ND are associated with CMA downregulation, whereas glioblastoma (GBM) presents an upregulated activity. Processes regulated by CMA are represented in the figure.

In most cells, chaperone-mediated autophagy (CMA) participates in protein quality control by degrading oxidized and damaged proteins under stress conditions and also contributes amino acids through degradation of proteins at advanced times of starvation.

Autophagy happens while we’re sleeping—because that’s when we’re fasting. “If you eat a 30-inch pizza before bed, you’re not going to have any autophagy,” Dr. Gottlieb says. “That means you’re not going to take out the trash, so the cells begin to accumulate more and more debris.”

Age-related declines in cognitive fitness are associated with a reduction in autophagy, an intracellular lysosomal catabolic process that regulates protein homeostasis and organelle turnover.

Senescent microglia are present in greater numbers in the brains of patients with neurodegenerative conditions.

There is compelling evidence that, at least in model organisms autophagy protects against diverse neurodegenerative diseases by decreasing the population of senescent cells. and proteins.

Cellular senescence plays a direct role in chronic and age-related diseases and conditions, such as diabetes, atherosclerosis, neurovascular dysfunction, frailty, and dementias. Accumulation of senescent cells with aging contributes to multiple, age-related comorbidities that are frequently accompanied by neurodegenerative diseases, especially AD.

Autophagy is an essential catabolic process frequently failing in neurodegeneration.

Autophagy is an essential cellular antioxidant pathway in neurodegenerative disease.

Autophagy not only promotes waste clearance in the brain, but also alters cognitive abilities by changing the efficiency of the intracellular transportation system.

There is a role for autophagy in the clearance of extracellular Aβ fibrils by microglia.

…autophagy is critical for neuronal survival. Recent work in the field of Alzheimer’s disease has provided molecular and cellular evidence that links diminished autophagy to the pathogenesis of AD.

Examination of a large set of human brain samples revealed a striking relationship between Alzheimer’s disease (AD) status and isomerization of aspartic acid in a peptide from tau. Relative to controls, a surprising increase in isomer abundance was found in both autosomal dominant and sporadic AD samples. To explore potential mechanisms that might account for these observations, quantitative analysis of proteins related to isomerization repair and autophagy was performed. Differences consistent with reduced autophagic flux in AD-related samples relative to controls were found for numerous proteins, including most notably p62, a recognized indicator of autophagic inhibition.

The hippocampus has a distinct circadian rhythm of autophagy that can be altered by sleep fragmentation.

Autophagy is up-regulated by calorie restriction, via neuropeptide Y.

Short-term fasting leads to a dramatic upregulation in neuronal autophagy.

Based on literature data, it is suggested that physical exercise can induce autophagy in the aged brain via multiple mechanisms. Exercise induces autophagy in peripheral tissues and in the brain.

Stimulating mitophagy and optimizing mitochondrial function through exercise may forestall the neurodegenerative process of AD.•

A high dose of Urolithin A positively impacts exercise-performance measures. An increase in mitophagy proteins in human skeletal muscle observed in parallel. Supplementation is safe and increases circulating levels of Urolithin A.

Senolytics including quercetin and fisetin have been shown effective at decreasing senescent cells in humans. Senolytic interventions not only demonstrated the feasibility of extending healthspan but also evidenced the alleviation of a wide range of pre-existent age-related symptoms including: improved cardiovascular function, reduced osteoporosis and frailty [26]; enhanced adipogenesis, reduced lipotoxicity and increased insulin sensitivity [27]; improved established vascular phenotypes associated with aging and chronic hypercholesterolemia [28]; as well as radioprotection and rejuvenation of aged-tissue stem cells [29]. There is evidence that exercise has senolytic properties in healthy humans

Ketosis may promote brain macroautophagy by activating Sirt1 and hypoxia-inducible factor-1. Ketones may up-regulate neuronal autophagy as a rational strategy for prevention of neurodegenerative disorders; elimination of damaged mitochondria that overproduce superoxide, as well as clearance of protein aggregates that mediate neurodegeneration. Many people can go into ketosis between meals. So run on an empty stomach, especially after doing resistance training.